Since 2015 I’ve been coming to Luštica, this beautiful wild and mostly untouched peninsula on the south of the Adriatic Sea in Montenegro. Located at the entrance of the Bay of Kotor, Luštica, throughout history, played an important role of protecting Kotor and other cities inside the bay from incoming naval traffic and therefore still hosts multiple abandoned and impressive military installations built by the Austro-Hungrarian empire in over a century ago, constructions that anywhere else in Europe would be declared as cultural heritage.

After spending a whole year in Luštica in 2018 I became an aficionado of it’s history, setting out every day to discover the ancient installations which date back as early as the 1890’s. Whenever I had friends visiting me from Berlin or other places I took them to visit the bunkers, tunnel systems and fortifications where everyone basically said the same thing: “This is so amazing! All of this would be a museum in Germany. But here it’s just abandoned.”.

Despite attempts to renovate, reconstruct, and repair partially destroyed forts after the Second World War, the present ruins testify otherwise. Most of them have been deserted for more than 60 years. During this period, barely any feet have walked their stairs, floors or their roofs.

A couple of days ago, in May 2019, when I came back to Luštica again, I was shocked. 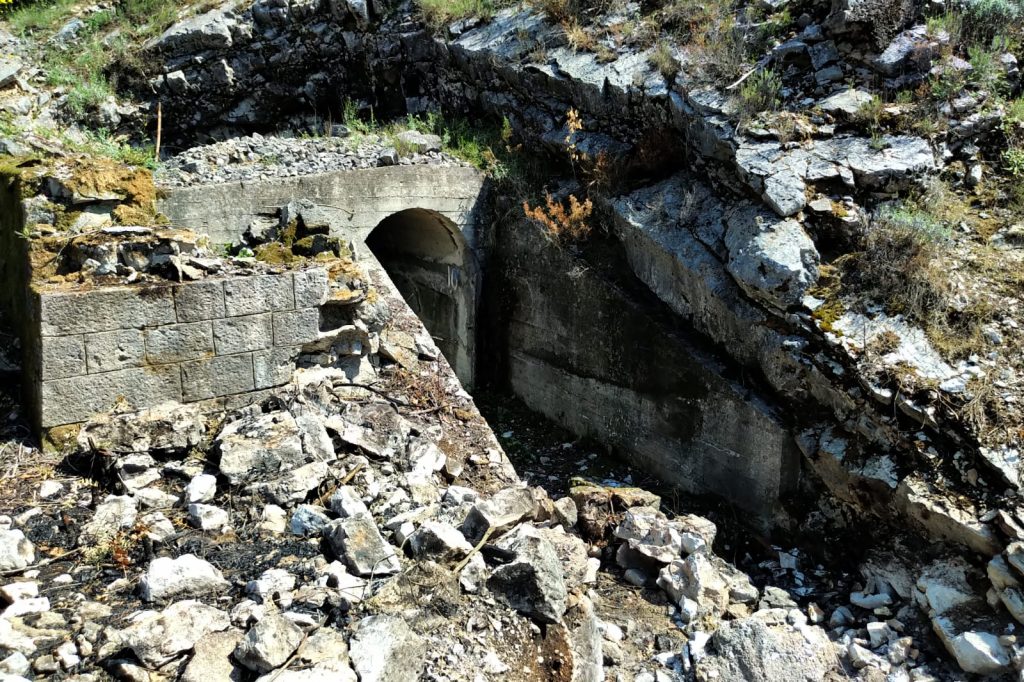 This tunnel used to be barely visible. End of April 2019 trees were cut and bushes were burned. 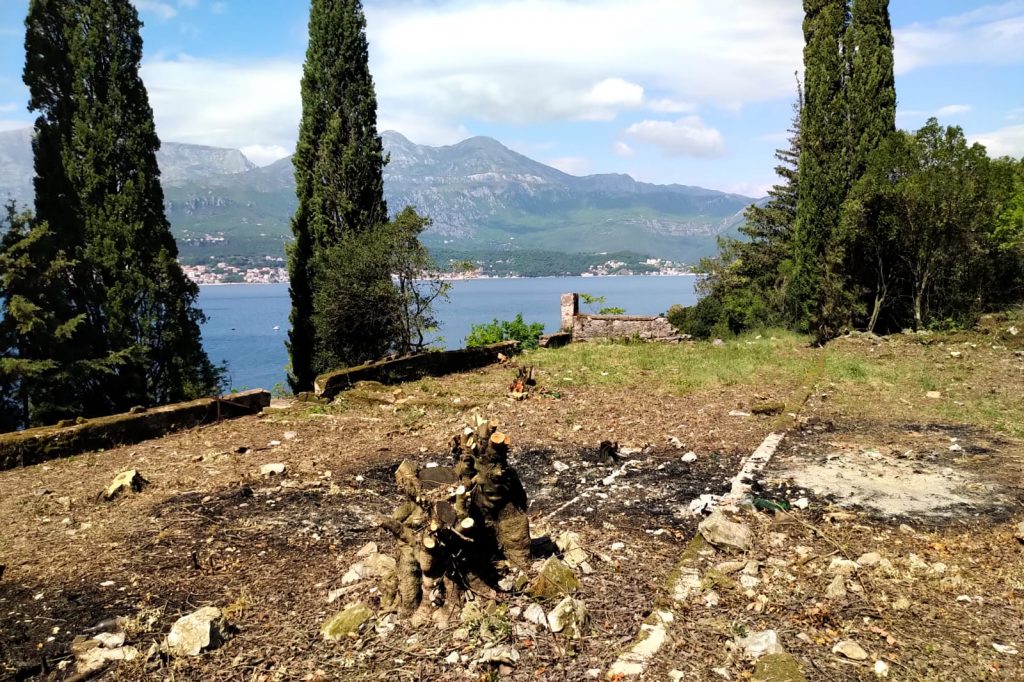 Where previously there were 120 year old trees and bushes, there is now nothing left. 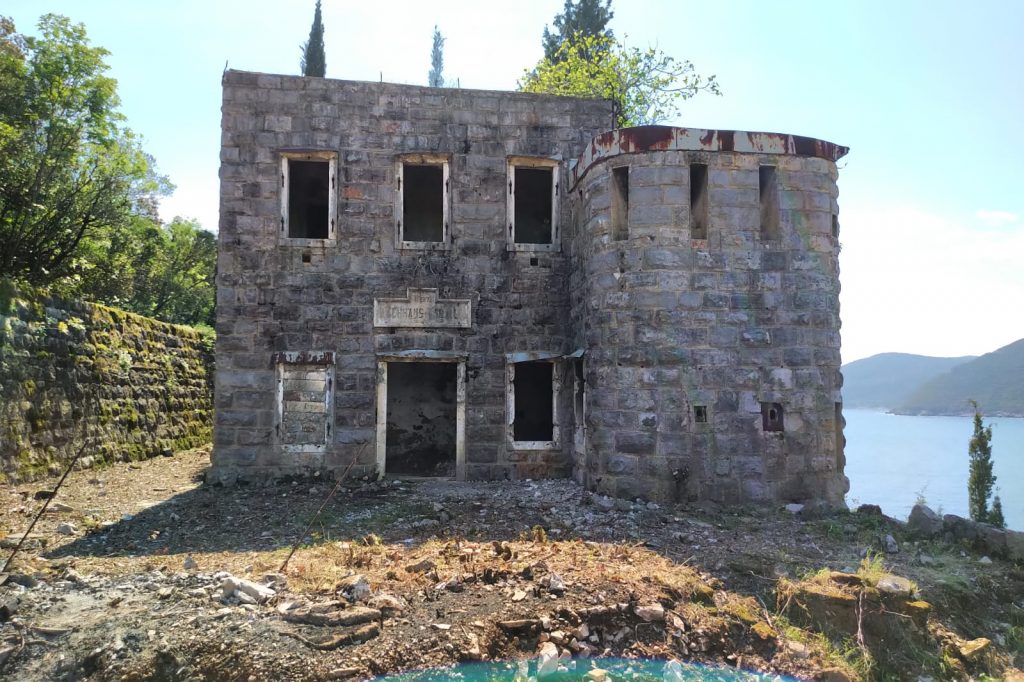 After chopping off the ancient trees and vegetation around the guard house, is destroying Wachhaus Kaballa the next step?

After climbing up the steep path, I previously had to free with a machete, to the guard house Luštica, which a century ago protected the coastal battery Luštica from up above, I saw and heard what are the first steps of the destruction of an important part of cultural heritage and nature:  Bulldozers and excavators building a new road down to Dobrec beach, ripping out all trees and agave gigantes which stand in their way.

Dobrec beach, until very recently, a place where you could only go by boat to have breakfast, lunch or dinner at a family run restaurant will never be the same again.

The cute restaurant at Dobrec beach which could only be reached by boat is already gone. The road to Dobrec already cut into Luštica’s nature. Trucks with tar will follow.

“Why would they cut down all this nature? A road just to get to this one restaurant?”. It did not make sense. I ran down the hill passing the coastal battery Luštica and discovered that the new road starts dangerously near to this beautiful fort which remains lay there untouched for decades below vine tendrils. It was a Sunday, but the construction works were full on and I was able to walk on the new road for 800 meters. 800 meters of destroyed nature.

A car arrived, two men inside. I gave them a sign indicating I wanted to ask them a question. The car stopped next to me.

They rolled down the window. “Dobar dan, do you know what this road is for?”, I asked.

“Yes, it’s the new road down to Dobrec beach”, the answered.

“Are you the new owner then?”.

“No, I own the the excavators.”, the driver replied.

“And they are building this road just to get to this one restaurant?”

I texted a friend who worked as a waiter at Dobrec beach for several seasons asking him if he knew anything about the recent developments. 5 minutes later the answer came in:

“Yes. They changed the owner of dobrec. Now there are some politicans involved and some people…Sorry for that…”.

“They are building a road just for that one restaurant?”, I asked.

“Those people bought land around also, they will make some villas, hotels, bars…in the future. They will destroy even more a lot more…Sorry bro, I understand you! We are all pissed off!”

I cycled back to Krasici and passed by Fort Kaballa and noticed trucks loaded with stones standing around, the smell of tar in the air. When back home I went online and read what Sandra Kapetanovic, cultural heritage coordinator for the Kotor-based NGO Expeditio, said a while ago in an interview: “Untouched nature and rich cultural heritage are what makes Montenegro unique and attractive, not fancy hotels that could be anywhere on earth.”

Minutes later I was chatting with Expeditio on facebook.

“We just found the plans for the construction work you described. We knew tourist facilities on Luštica were planned, but did not imagine that it will be such a huge complex, this is terrible! Also we were under the impression that an expert recognized that area as an important part of buffer zone of an UNESCO site. We are so frustrated how all those plans are being adopted, and this one is from 2009. We think that the works are for that complex. Attached goes the plans we found.” 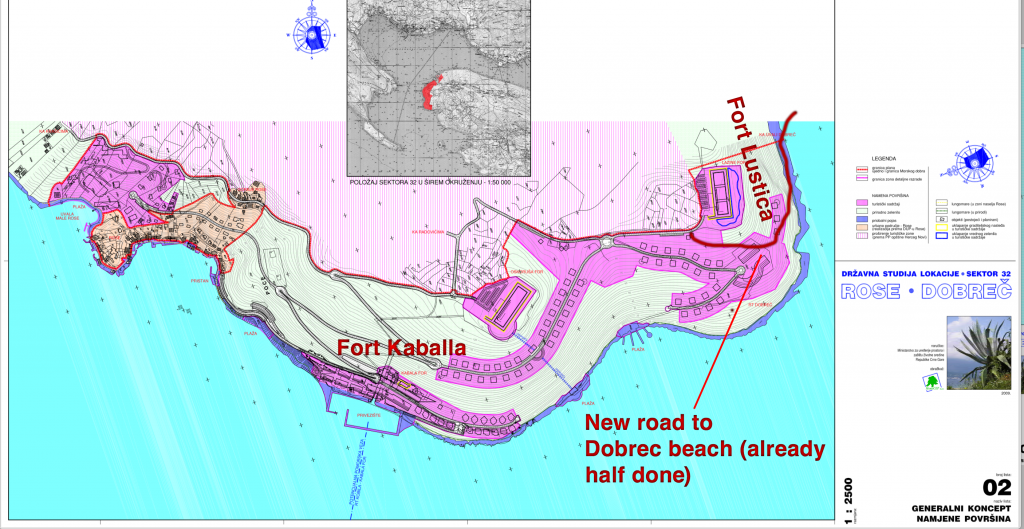 Development plans for the area between Rose and Dobrec.

I could not believe it. The yugoslav submarine tunnel, the hidden tunnel systems, the coastal battery of Luštica, my beloved guard house Luštica with it’s spectacular view over the bay, everything is planned to disappear and to be turned into ugly hotel elements?

Minutes later I was chatting with Volker Pachauer, co-author of the “The Austro-Hungarian Fortresses of Montenegro” and forwarded him the plans. Volker had written his Phd thesis about the Austro-Hungarian fortresses, he probably would be even more shocked than myself…

“This is terrible. I took a closer look at the plans. As I understand, the coastal battery Luštica will be destroyed. In its place, three hotel elements are being built!”.

And with this final message my day on Luštica ended, when the sun sank behind the hills on the Croatian side of the bay. Is this it then? 120 year old forts and nature which were untouched for a decade destroyed by giant machines in a a couple of days? Just so that some tourists could use the new hotel facilities for two months during season, leaving them empty during the rest of the year?

Is the area between Rose and Dobrec beach, including multiple fortifications, now doomed to suffer the same destiny as Mamula island?

What can be done to stop this? “Probably not much”, most of the people I talked to said.

Nevertheless, it was the below picture picture, showing the destruction of Fort Mamula, which made the Directorate for Inspection Affairs order to suspend works on the island of Lastavica in March 2019. Maybe together we can do something similar! 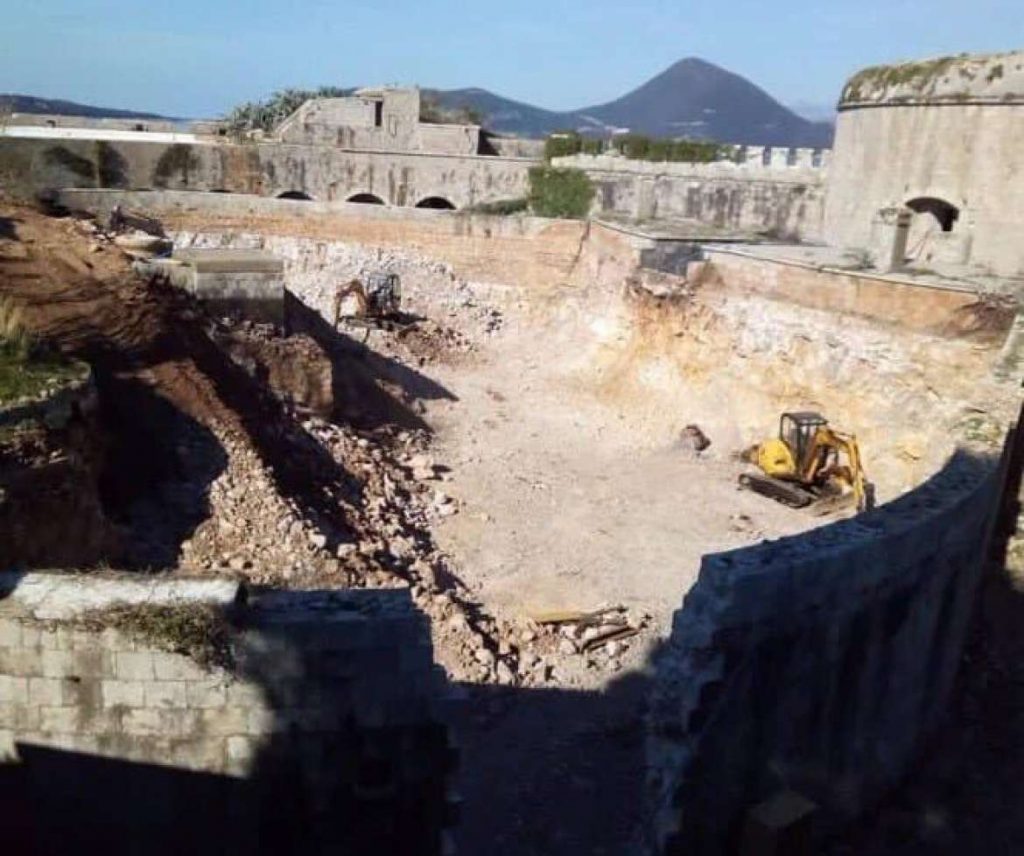 This picture played a role in temporarily stopping the construction work on Mamula island and causing an investigation.

Feel free to share. And if you have any info/news/ideas how to stop this destruction, count on me.